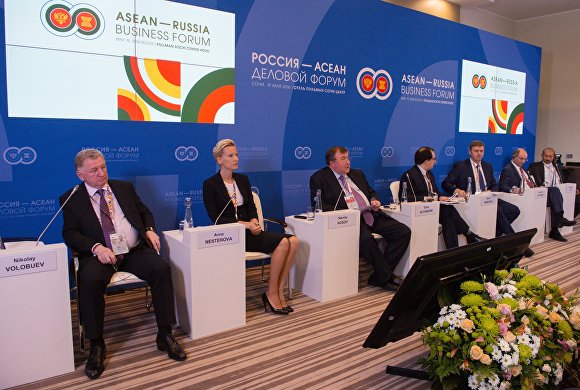 "Cooperation with ASEAN countries is one of our development priorities. Russian Railways have established contact with six out of ten ASEAN member states, including companies from Vietnam, Indonesia, Cambodia, Laos, Myanmar and Thailand," Alexander Misharin said.

Continuing the discussion of transportation development between ASEAN and Russia, Igor Kozlov, Acting General Director of Ruselectronics (a subsidiary of Rostec), said that the company is offering ASEAN members to use the same screening equipment for railway and road security checks that Russia employs.
"We believe that if this initiative grows into a single end-to-end transportation system within ASEAN, between ASEAN countries and Russia, and within Russia, this will significantly undercut the threat of international terrorism," Kozlov noted and added that transportation lines are the main vulnerabilities in combating terrorism as they are used for transporting arms and explosives.

Particularly, Ruselectronics offers a contactless screening technology for vehicles, including equipment that can detect explosives in locked containers or long trucks moving at 70 km/h, with a success rate of over 99%. Four screening facilities of this kind are already in use in Russia.

Nikolay Volobuev, Deputy Chief Executive Officer of Rostec Corporation, expressed interest in developing relations with Myanmar. "We would like to forge links with Myanmar in the delivery of high-tech industrial products. We are ready to offer helicopters, cargo vehicles, energy and gas processing equipment, modern lighting systems, medical equipment, air traffic control systems and other such products," he said.