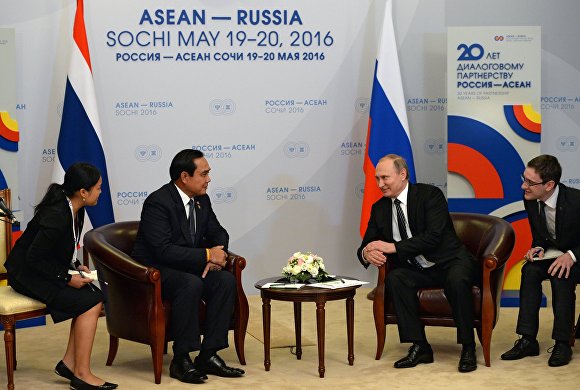 President of Russia Vladimir Putin: Good afternoon Mr Prime Minister. It is a great pleasure to meet you personally.

Russia and Thailand have had very close ties for 120 years now. Indeed, next year we will celebrate the 120th anniversary of our diplomatic relations.

I know that you met with Russia's Prime Minister in St Petersburg yesterday and signed a number of important agreements. We will do everything we can to ensure their implementation.

I would like to start our discussion now by noting that despite the current global economic situation, our relations continue to develop well in all areas, including foreign politics, defence, and security.

Mr Prime Minister, we are very pleased to see you here and we thank you for your support for today's event. I ask you to pass on my best wishes to His Majesty the King of Thailand and the Queen. I have very fond memories of my meeting with them.

Prime Minister of the Kingdom of Thailand Prayut Chan-o-cha (retranslated): Mr President, on behalf of our country, Thailand, we would like to thank Your Excellency for the invitation to take part in this summit.

This chance that we have to meet and talk face-to-face could be called a historic event.

This year, we are marking the 119th anniversary of our ties, and next year we will celebrate the 120th anniversary of the establishment of our diplomatic relations. This is also a historic event and we plan to mark this occasion in St Petersburg and Moscow. Our country is already prepared to organise a number of events.

We want to thank Russia for the support that has helped us to maintain our independence.

Yesterday, we thanked the members of the St Petersburg municipal government and His Excellency Mr Medvedev for giving our delegation such a warm welcome.

We will develop and promote our relations, all the more so as we have planned a number of events during the 120th anniversary celebrations next year to further develop and strengthen our relations.

Our talks with His Excellency Mr Medvedev were very constructive and useful.

I have eight ministers with me on this visit. This is the biggest delegation yet on my foreign visits. I also sent two deputy prime ministers in advance of my trip to prepare for this visit in order to make it a success.

Yesterday, my ministers had the chance to meet personally with their counterparts here. We discussed ways to increase our trade turnover five-fold over the next five years. I think that we can achieve even greater results over this time.

We also discussed cooperation in the agricultural sector. We would like to sell more agricultural products to Russia. We also spoke of the possibility of sending a Russian delegation to Thailand to see our goods and products.