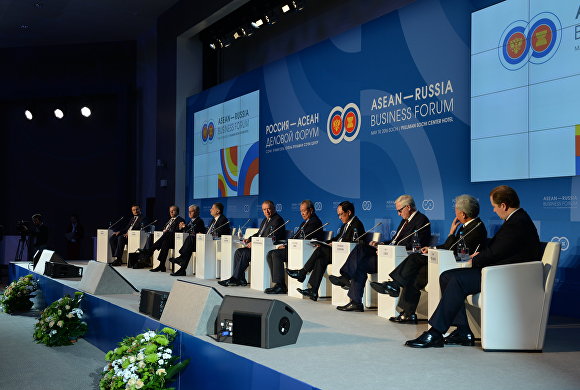 Experts: Russia is willing to take an active part in carrying out ASEAN nations’ development programmes

In particular, businesses in Russia and the ASEAN countries want their respective governments to speed up the creation of preferential trade relations, First Deputy Minister of Economic Development Alexei Likhachev said on the sidelines of the ASEAN — Russia Business Forum.

"The large number of representatives of ASEAN and Russian businesses participating in the forum means that promoting trade and investment is important to us. However, there are problems in our relations, which are primarily related to the registration system, customs clearance and certification of goods. That includes import duties, safeguard measures, and logistics solutions that are not always convenient for businesses. Therefore, entrepreneurs are asking their respective governments to move more quickly along the track of creating preferential trade relations and free trade areas for free movement of goods, services and capital," he said.

Despite this, trade between Russia and ASEAN countries grew by 20 percent in terms of physical volume in the first quarter of 2016. Russia increased its supply of machinery and equipment, and metals. "The trend in the food sector is extremely positive," Alexei Likhachev said.

He said that ASEAN is the only integration group whose imports to Russia showed a positive growth rate for the first quarter. "We didn't have the same positive trend in terms of dollars in the first quarter with any other group of countries, or any other regional association," he said.

"Compared to 2014, our non-oil and gas exports grew by 30 percent. This shows that we still have significant potential to strengthen relations between ASEAN countries in terms of exports, especially now, as the majority of ASEAN countries are implementing large-scale national development programmes incorporating ambitious plans to upgrade and modernise their transportation, energy, and social infrastructures. We would like to think that Russian companies can take an active part in carrying out these programmes," he said.

"Russian meat packers have revised their policies with regard to the markets of Southeast Asia, particularly ASEAN countries," he said. "Until recently, we underestimated them. But if you look closely at these markets, they represent almost 630 million people, most of whom are young. The demographics are such that people will consume more meat, especially given the economic growth rates."

Talks have been resumed with countries, such as Vietnam, Thailand, Indonesia, Singapore, and the Philippines, Yushin said. "What do we expect from our partners? It is no secret that many countries are clearing out their markets," he said. "Sometimes, they put forward fair demands, sometimes they intentionally stretch out negotiations. We would like to overcome these difficulties in a speedy manner through talks with global investors from Vietnam, Singapore, and Thailand. Often, we do not get timely responses to the inquiries our competent authorities send on our behalf," Yushin said.

He believes that Russia should go beyond import substitution, which is a local goal. Russian enterprises in any industry should strive to produce globally competitive products, he said.