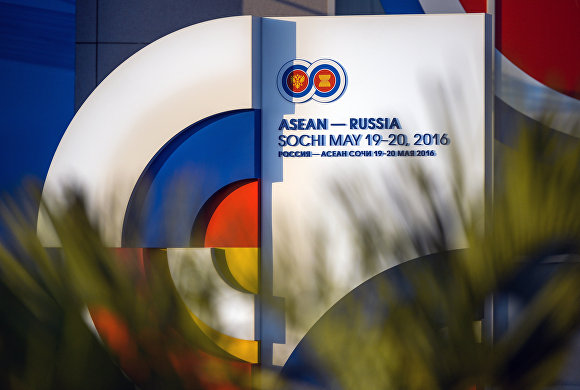 The ASEAN — Russia Summit was launched today in the Imereti Valley, the resort area of Greater Sochi on the Black Sea, the TASS news agency has reported. A business-like atmosphere at hotels and congress centres is fresh proof that the local infrastructure built just for the 2014 Winter Olympics that has been used many times since, will be put to good use for many more years.

Sochi is possibly the best city in Russia for a meeting with ASEAN leaders, and not only because of the infrastructure, which can be found in many other Russian cities that have hosted large international forums or sporting events. But no other city in Russia has the nearly tropical climate so very similar to the climates of the ASEAN leaders' home countries. Rains don't last long here, the sun shines brightly, and hotel swimming pools are a suitable replacement for the still-cold sea.

The summit organisers have created good working conditions for journalists. The summit's press centre at Hotel Imeretinskiy, next to the Olympic Park, has 132 computer workstations to allow 850 accredited journalists to work comfortably. Most of these journalists are living in this hotel, and those who are staying in other hotels can take advantage of the comfortable shuttle system of transportation provided for them.

The programme includes many more events in addition to the Business Forum, bilateral meetings and plenary sessions. For example, journalists will be able to ask questions about ASEAN — Russia cooperation at briefings by Presidential Press Secretary Dmitry Peskov, Far East Development Minister Alexander Galushka, Minister of Culture Vladimir Medinsky, Deputy Minister of Communications and Mass Media Alexei Volin and Deputy Minister of Foreign Affairs Igor Morgulov. It appears that Sochi has taken over as Russia's capital for a few days, as even the Foreign Ministry's Spokesperson, Maria Zakharova, will for the first time hold her weekly briefing on the pressing issues of the Russian foreign policy here.

Security will be tightened to protect the large number of foreign dignitaries and Russian officials. However, this will not create any problems for accredited journalists, who will be able to reach the events' destinations quickly and using the shortest possible route. Representatives of the organisers and volunteers are always ready to help: the former will provide information on the summit's official programme such as meetings and other events, while the latter will explain how to reach the hotel where these events will be held or where shuttle bus stops are. They will also hand out free souvenirs.

In other words, the traditions created during the 2014 Winter Olympics live on, and those who feel nostalgic about the high tenor of the games — there are many journalists who do — can go to the nearby Olympic Park, where the sports arenas are waiting for new champions.

The organisers, who have created excellent working conditions at the summit, know that work is more productive after recreation and relaxation. On the evening of 19 May, the summit participants will attend a reception and journalists a concert to be staged near the press centre. Several events have been also organized for Sochi residents. On 20 May, they will be able to enjoy an ethnic festival featuring Brunei music, Philippine and Indonesian dance, unique Myanmar and Thai puppet shows, an exhibition of national costumes and decorations and drawing lessons of Malaysian ornaments. In other words, the ASEAN — Russia Summit is not only a top flight event but also a real festival for all residents and visitors to Sochi.